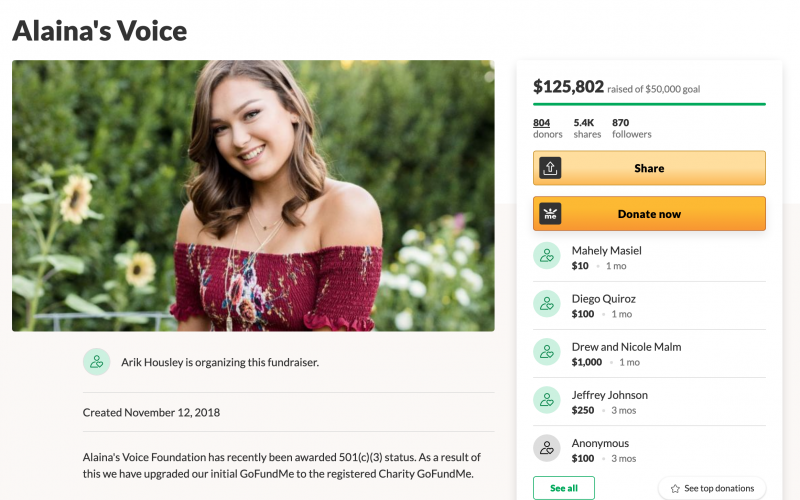 We hope you and your family are staying safe and well in this ever-changing time in our lives.

We are overwhelmed by the continued outpouring of love and support and now, more than ever, we’re wanting to find ways to support those who need it most.

Alaina’s Voice Foundation was recently recognized as a 501(c)(3) Charity and because of this we have upgraded to a Charity GoFundMe.

If you wish to donate, you can now do so with the below link. 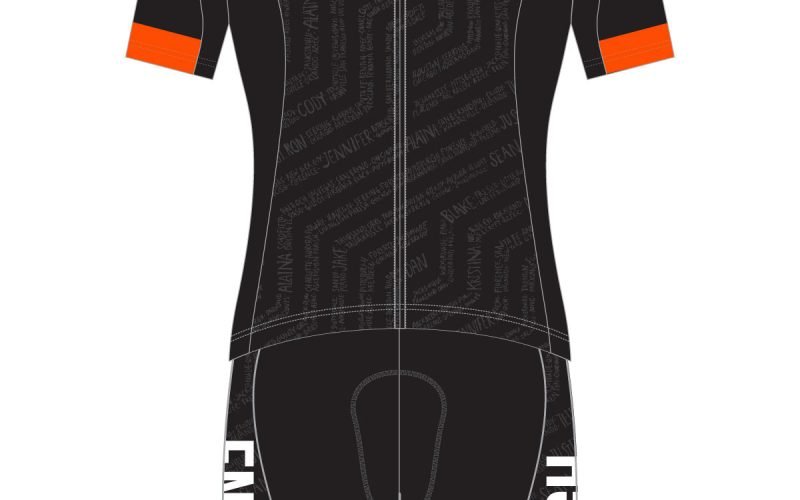 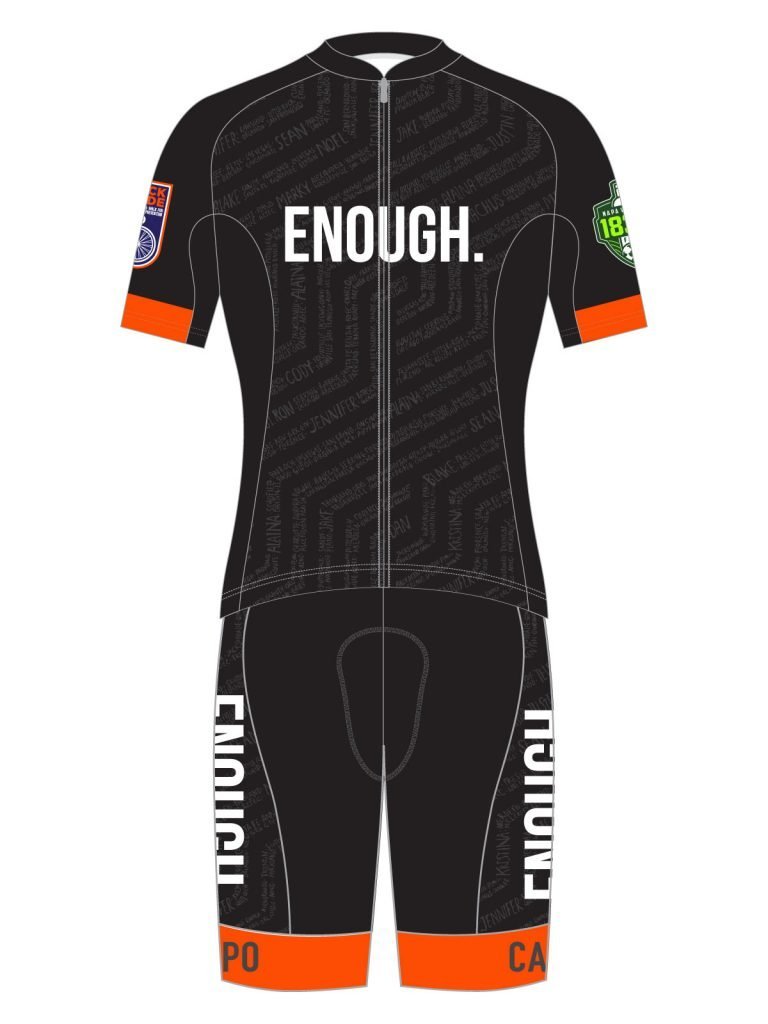 A few weeks ago, we had coffee with Arik Housley, our friend who tragically lost his daughter Alaina exactly one year ago in the Borderline Bar and Grill shooting. He was describing the many ways he feels and senses Alaina reaching out to him in spirit, especially through music. He mentioned the idea of possibly writing a song for her. But to me that felt like too heavy of a responsibility… how could I possibly come close to capturing the right emotion and write a song about someone I never knew? After leaving our meeting I had already decided not to even try and attempt it.

The next morning, Elliott’s alarm went off… the same alarm we hear every morning. But that morning, while I was still half asleep, a melody came to me that went with the chords of his alarm. I got up and recorded a voice note in my phone. Throughout the day the melody was stuck in my head, and lyrics would randomly come to me. It wasn’t until I had already written the first verse that I realized I was writing a song for Alaina. It was a very strange experience… it felt as if I was channeling something from a different dimension. I don’t know how else to describe it. I TRIED NOT to write this song, but I was powerless against it.

All proceeds earned for “Calling From The Heavens” will be donated to Alaina’s Voice Foundation.

GET THE SONG ON YOUR CHANNEL OF CHOICE HERE 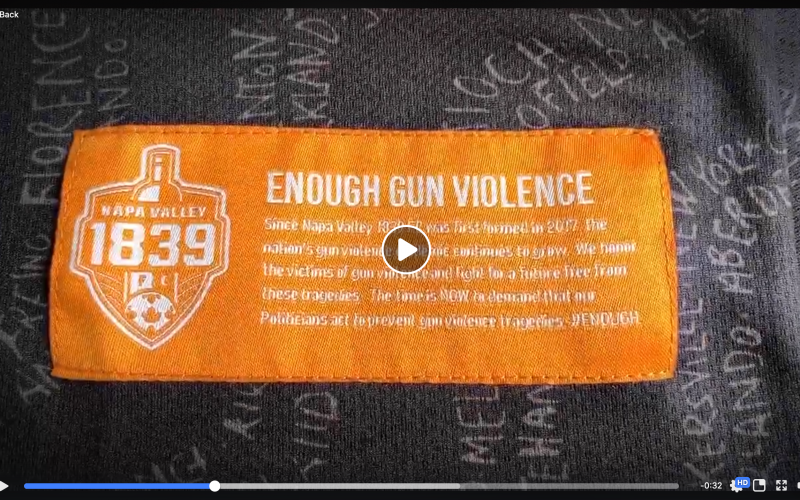 #ENOUGH. • Get your limited edition kit by following this link https://squareup.com/store/napa-soccer-entertainment

Since #NV1839 was formed in 2017 the nations gun violence epidemic continues to grow. We honor the victims and fight for a future free from these tragedies. The time is NOW to demand that our Politicians act to prevent gun violence tragedies.

Kristina Kaylee Morisette was the youngest of 3 siblings, and came as a surprise to the family of Michael and Martha, who with Jason and Allyson had once thought that perhaps "two was enough.

Kristina's arrival and undeniable presence would prove that apparently "two" was NOT going to be enough for this family. And as the youngest, she started out as the "center" of the family, and was primarily considered in family decisions.

As she was years behind in age, she yearned to close that gap. And always wanting to please others and be the center of attention, Kristina strove to do the things, and have the friends that her brother and sister did.

But, as she grew, Kristina began to have her OWN things and to have her OWN friends. She developed a passion to love her family and her friends HER way. She had a sense of creativity and giving and loving that was all her own.

In her 20 precious and priceless years, Kristina made her busy life all about building, and repairing, and strengthening her friendships, while she pursued her dreams.

She was just blooming into a young woman of her own, and her job as Hostess at Borderline brought her into contact with many new and interesting people who were quickly becoming her future circle of friends.

Kristina was learning to be free and strong, and her life was full of hope and opportunity in the future. We are all at a loss, as we are all robbed of spending our futures with her.

Mark Alan Meza, Jr. was born in Santa Barbara, CA on November 19, 1997. Marky, as his family and friends referred to him, came into this world with that great big smile that everyone came to know and love.

He could brighten anyone’s day with a flash of that beaming smile. He was exceptionally funny – he could just look at you, and you’d be laughing so hard your belly hurt. That was his daily mission – to make everyone around him laugh. Whether it was through his jokes, his dance moves, or his silly faces, he lived to make others smile.

As a child he loved being outside. You could usually find him in the driveway on his skateboard, practicing all of his tricks! As he got older, he ventured out of the driveway and into the skate park. He was always determined to land his next big trick and spent hours practicing. This determination landed him in the hospital on several occasions for broken bones, concussions, and even a brain bleed, which required major surgery. He didn’t let any of that stop him though, and after some, probably not enough, recovery time, he was back on his board.

In his teen years, his love of being outside could also be seen in his growing passion for photography. He had a way of looking at things, and capturing them that was unexpected and truly beautiful.

Before working at Borderline, Marky worked with his older sister, Ari, at a restaurant in Carpinteria called, Corktree. There, he really shined. He could talk to anybody – any walk of life, any age. Customers loved him.

Although he was such a light for so many, for quite some time, he was trapped in his own dark abyss. However, at just 20 years old, he was able to conquer his demons. Marky spent time in Pasadena at a recovery home called, Echo House. There, he was able to tackle his addictions, and whole-heartedly embrace sobriety. He was so committed to a clean and sober life, so proud of how far he had come, and really wanted to help others with similar struggles.

After his stay at Echo House, he came home to live in Oxnard with his mother, Theri. It was then that he began working at Borderline Bar and Grill. His family was concerned about him working in a bar just after his stay in a recovery home, but after seeing him in action one night, it was clear Borderline was not just any other bar. It was obvious how much Marky loved working there. He often talked about his new friends – his new family – and when he did, he could hardly keep that beaming smile off of his face.

Although his time with us was cut short, his family and friends will always remember him as the compassionate, ray of light that he was. 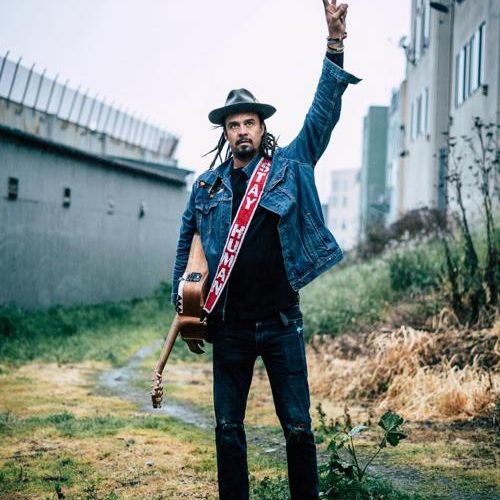 A concert by Michael Franti & Spearhead on Oct. 13 at the Napa Valley Opera House to benefit Alaina’s Voice Foundation.

The performance is being presented by BottleRock Presents, and tickets are available at bottlerocknapavalley.com. Special guest Devon Gilfillian opens the show.

For general admission, doors open at 6 p.m., for the 7 p.m. show. The VIP Experience with Franti begins at 5 p.m. (doors open at 4 p.m.) and includes a pre-concert, family-style dinner, acoustic performance, meet and greet, complimentary wine, beer and cocktails, and VIP/balcony access to the show.

Alaina Housley was a victim of the mass shooting at Borderline Bar in Thousand Oaks. The Vintage High School graduate had gone to Pepperdine University in the fall of 2018 where she was a freshmen regent scholar and a member of the Mock Trial Team. She was planning to go to the Florence, Italy study abroad program for her sophomore year.

“Alaina’s Voice Foundation was created not to immortalize her, as she will live forever in our hearts,” said Arik Housley, Alaina’s father. “We created this foundation to make a change in our society.”